0
Articles > Business > Here’s How To Handle A Salon Walkout

Here’s How To Handle A Salon Walkout 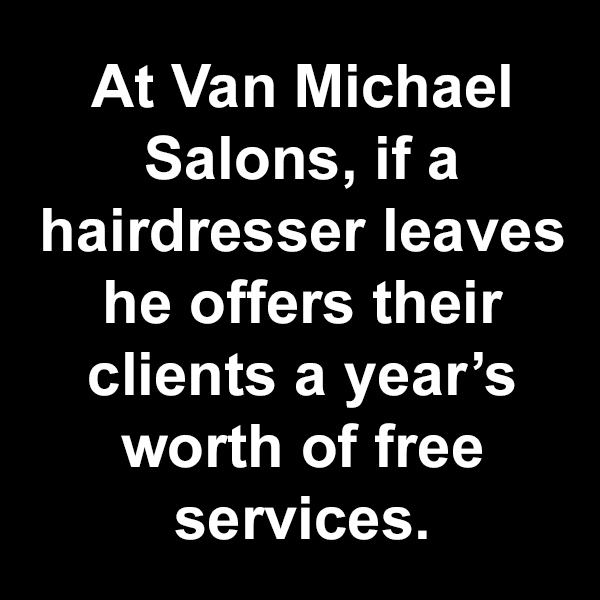 Tips For Handling A Salon Walkout

It’s a business owner’s worst nightmare—an entire salon staff walking out, leaving you to figure out what went wrong and how to fix it. Well, we have advice from Van Council, owner of 8 salons (the busiest in the United States per square foot) on how he handled a mass exit.

The owner of Van Michael Salons and Former Artistic Director of Intercoiffure now employs more than 400 people and has become a leading speaker on how to efficiently and effectively manage a thriving salon with long-term employees—but even Van has experienced a walkout, and even he had to come to terms with some hard truths.

We caught up with Van at the 2018 Aveda Congress in Minneapolis, Aveda’s biennial global celebration honoring hairdressing and the Aveda network. This year’s Congress theme was “Know What We’re Made Of,” inspiring reflection into what makes Aveda uniquely Aveda. Keep reading to hear Van’s walkout story—and learn what he did to rectify the situation.

Why The Walkout Happened

It’s pretty simple, Van says—“I wasn’t there.” Van and his brother Michael opened their first salon in 1984. By 2000, with four salons open, Van was feeling burned out. “I got a house in the mountains and I didn’t show up for a year.”

How To Recover After A Salon Walkout

Van quickly moved hairdressers from other Van Michael locations to the salon where the walkout occurred to ensure clients didn’t experience any service interruptions. And he did something major—he gave clients who lost their hairdressers a year’s worth of free services.

Yes, a YEAR’S worth of free services. It’s a policy at Van Michael salons after a hairdresser leaves—Van himself pays full commission to the hairdresser taking the guest, but the guest pays nothing.

He also began renovating his salons and opened a salon in Miami. “I had to let people know I was back and we were going to grow,” he said.

And perhaps most importantly, he learned a major lesson. “People had the perception that I didn’t care [about the salon or them],” Van says. “The lesson I learned is that I have to be there. I found out how much I care—I need to nurture [employees] and give them my time.”

Since then, Van has carefully defined his business culture and can now say that most of his salon employees have been with him for at least 10 years.

Van’s team crushed it at Aveda Congress! Click through the slideshow below to see their work!