12 No Bullsh#t Barbering Truths From The Scumbag Barbers 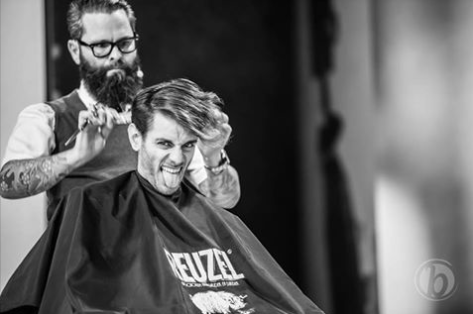 BTC’s 2016 COLOR, Cut & Style show offered hours of serious, intensive education on every aspect of the profession, along with brilliant insights and inspiring displays of creativity. And then the Scumbag Barbers showed up.

Closing the show, the founders of Reuzel and Schorem Barber in Rotterdam pounced on the audience with irreverence, humor and ballsiness, ending the weekend memorably to say the least. Oh, and they slyly slipped in some of the best barbering exhibitions ever seen in this country. Promising to deliver “the worst hair show in the world,” downing beer and cracking jokes, Leen and Bertus gave the audience a glimpse into their barbering world with these truths.

1. “A true barber shouldn’t be on a hair stage. But if you get an email from Mary Rector-Gable saying do you want to come to Ft. Lauderdale and have some drinks and cut some hair, you say f#ck yeah!”

2. “We got no dancers or elephants or guys with muscles. We don’t do models. We have a little shop, so we went out on the street and found guys to cut because that’s what we do in the shop.”

3. “People say barbering is a trend. But the first barbering tools were found in the Pyramids. Barbershops have been around for 20,000 years. We were surgeons, dentists, tattoo artists.”

4. “Barbering isn’t an art. It’s craftsmanship. You do it over and over. We’ve been doing fades since we were 12.”

Want more truths, tricks and tips from the Scumbag Barbers? Check out their DVD!

7. “At Schorem we only do the classics. Rock ‘n’ roll and punk cuts. Those are the lifeblood of our shop. Why? They make the panties drop.”

8. “We look for the haircuts that are hidden in the hair. You may not know until you start cutting what the haircut should be.”

9. “A lot of guys don’t change their hair ever. Because if he scored with that hair and with what you used on his hair, he’ll die with that hair.”

10. “We don’t take appointments. We don’t have islands in a salon. We have conversations. We tell stories. We throw away the iPhones.”

11. “Basically every haircut is a flattop. You grow it out, and it’s a pompadour.”

Check out all the photos from the Schorem Barbers’ Show!