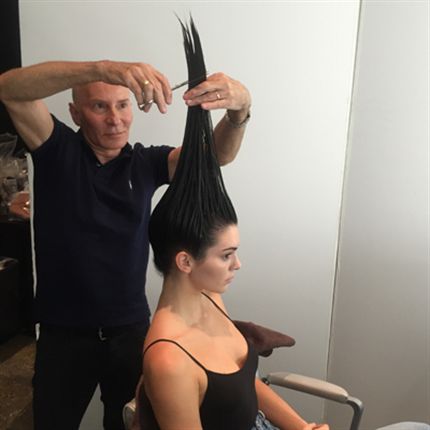 Even though Kendall just turned 20, she was old and wise enough to know exactly who to call to do the snipping honors. Celebrity stylist and R+Co Co-Founder Garren has been responsible for the transformations of supermodels and actresses for decades—they trust his eye, his judgement and his skills. He reveals that Kendall and editor Tonne Goodman requested him for the shoot. Assuming he would be styling the model’s hair when he walked in, he was shocked when Kendall ran up to him and announced, “You’re going to cut my hair off today!”

After the shoot, Kendall sent Garren a note thanking him for “making her feel great.” The feeling was mutual. “She is very focused, very real,” Garren says. “She really wants to work. She has no celebrity attitude. I did what I always do—I stuck my nose into things, I got involved with the clothes, the shots. I wanted her to feel comfortable and beautiful and own the pictures. So receiving her note was very special to me.”

Nonplussed, Garren started the process the way he always does—with photos. “I asked her to start looking through photos of supermodels, old and current,” he reveals, “and show me all the hairstyles she thought were cool.” Soon a pattern emerged. All of Kendall’s picks were cuts that landed just above the shoulders, swingy and sexy. “I said, ‘that’s the perfect length,’” says Garren. “Not a bob, something fresh. I cut it all one length, very blunt, straight all the way around. She was so happy she was laughing and giggling. No one does that. They usually go into shock.”

Styling the cut for the shoot was critical, says Garren. It had to look easy and cool.  He started by working R&Co CACTUS Texturizing Shampoo into the roots for stability and lift, followed by CHIFFON Styling Mousse from midlengths to ends. Then he tipped her head over and blow-dried the hair loosely with his hands. “No round brush!” he says. Once the hair was dry, he worked HIGHDIVE Moisture + Shine Crème into the ends. “That created the slight wave pattern and kept it looking modern, not ‘hair-do-y,’” Garren notes. He finished with a few quick spritzes of OUTER SPACE Flexible Hairspray.