Independent Contractors—Can You Fire Them? 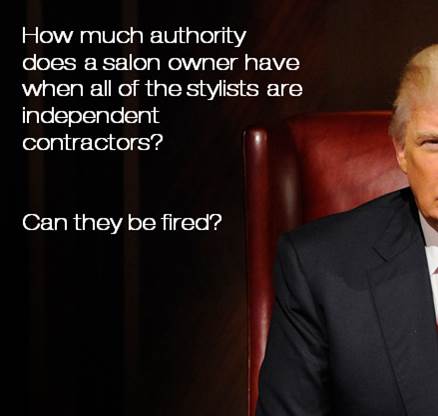 Here’s an issue that seems to be stirring up quite a bit of controversy in the BTC Community. As an anonymous BTC Member recently put it: “How much authority does a salon owner have when all of the stylists are independent contractors? For instance, is an owner within his or her bounds to terminate a contract if the stylist is consistently late or not showing up for clients?”

Well here’s the thing—unfortunately the issue is not black and white, and opinions range from totally gung ho to absolute NO. Because often, most of the confusion lies in understanding the difference between an independent contractor and an employee.

Set the Record Straight
All right, BTC Community, let’s get this out in the open right away. Under federal law, an employee is defined as a person hired for a “regular, continuous period to perform work for an employer who maintains control over both the service details and the final product.” An independent contractor, on the other hand, is someone who is normally hired to perform services for others under contract. In other words, an independent contractor is someone who is just that—independent. Of the salon, owner, products, etc. This means they do not need to answer to a salon owner, and therefore cannot technically be terminated by one.

“Ultimately, it is [the independent contractor’s] clientele,” says Suite Owner Kelley Layne of Phoenix, AZ. “If she is consistently late, and they accept that, it’s none of your business. I worked with a guy for 15 years who always showed up 20 minutes late to start his day and regularly ran 30 minutes late all day long. He was booked solid and his clients loved him.”

Georgia McCormick, owner of Hummingbird Hair in Peterborough, Cambridgeshire, agrees. “Legally, if you act like her employer, you can get into a fair bit of trouble. She’s self-employed and under no obligation to do as the salon owner wants. I would leave it to the clients to make up their own mind.”

Heidi Rockholm, owner of Belleza Design in Sandpoint, ID says, “I do have a contract of ethics I make my independent contractors read before they come to work and sign when they agree to rent from me…and it includes a clause about this kind of behavior.”

As Heidi concludes, it’s important to note that, as a salon owner, it’s your responsibility to carefully define the role of your independent contractors when they are hired. This means including a section in the contract that specifically addresses these kinds of issues.

Protect Your Investment
At the end of the day, most BTC Members agree that, unless the contract specifies otherwise, it’s perfectly acceptable to terminate an independent contractor if an owner feels the stylist is reflecting poorly on the salon as whole.

“It definitely depends on the state and your contract,” says Gary Worley, owner of Belle Vie Salon & Spa in Knoxville, Tennessee. “However, as an independent contractor, you can decide that they are no longer needed. Just like when realtors get asked to leave an office. They are independent contractors as well. If a contractor cannot represent your company in a positive light, then you have every right to make chances to protect your investment.”

“My state (Nevada) is a right to work state, therefore, if I want to ask the independent contractor to take their business elsewhere, I can do that,” says BTC Member Dacia Metsker. “At the end of the day, it’s your business’ reputation on the line, and if you feel their behavior could jeopardize that, you should put the other stylists’ needs ahead of the one person who is doing a crappy job.”

Bottom line? Determine whether a stylist is an employee or an independent contractor, write up a contract and stick to it! That way there will be no room for misclassification. Need some help? Visit the NFIB for more info.


*Note: Check with your state’s guidelines when determining employment status.