To a lot of different people, Martino Cartier is a lot of different things. To his viewers on HSN, he’s a savvy salesman for that phenomenal styling line with the lion emblem. To attendees of his stage shows, he has a commanding presence with enough liveliness and humor to rival our generation’s greatest comedians. And to some, he’s been a savior. Martino is the founder of Friends Are By Your Side—the charity that donates wigs to cancer patients who have lost their hair due to cancer. For Genny Robinson (née Farnan), Martino has been a blessing. A Lesson in Strength

In the December issue of Behindthechair.com On Paper, we met Genny, a high school teacher for special needs children. At 27-years-old, it was discovered that Genny had a glioblastoma grade IV tumor on her brain. She went into immediate emergency surgery, where her doctor was able to remove most of the tumor. Genny underwent 35 days of radiation treatment followed by a full year of chemotherapy that came to its conclusion one week prior to her wedding—the scars of which left a bald patch running straight through the center of her scalp.

Enter Martino. He got in touch with Genny just before her wedding and, using Hotheads Extensions, fashioned her a wig and styled it for her big day. She walked down the aisle looking absolutely stunning—feeling as confident and beautiful as every bride should. When we left Genny, she was on the mend physically and emotionally for the first time since her diagnosis. She was beginning to feel like herself again. The Courage of a Lion

In late 2014, Genny received word that her tumors had returned. However, this time there was hope that a trial procedure could eradicate her tumors without putting her through more rounds of chemo and radiation. It was risky though—there was an overwhelming chance it would fail. But Genny channeled all the courage she had to keep on fighting.

The Duke University Polio trials began in late 2014, with Genny as one of 22 participants. Doctors administered a dose of a modified Polio virus into Genny’s tumors as a way to start killing the tumors and then empower the immune system to take over. “The Polio virus finds the cancer cells, tags them and then leaves your system,” explains Genny. “Now it’s my immune system attacking the cancer cells and trying to get rid of them without medication.”

Of the 22 patients, only 11 survived. Genny was one of them. 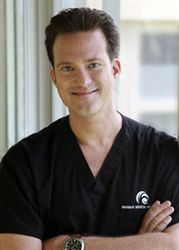 Dr. Alan Bauman began his journey from general surgery to cosmetic surgery in the early ’90s. At the time, he was not aware of the many advancements available in hair transplant surgery until he was consulting with a client who received one. “I imagined hair transplants would be nasty and pluggy, and this patient’s hairline was neither of those. It was a manmade hairline of his own living and growing hair,” says Dr. Bauman. Since then, the procedures have become even more precise and intricate. “It’s amazing to go from something that was painful and not feasible in terms of aesthetics to what we have today which is completely natural-looking and minimally invasive,” says Dr. Bauman. He is now highly regarded as an expert in hair transplant surgeries.

Coming from the same industry, Dr. Bauman has known Martino for years. This past spring, Martino first told him about Genny. “I knew nothing about her history at the time and it is amazing,” says Dr. Bauman. “He told me how he did her hair for her wedding and how she was looking for something more permanent for her situation.” However, with the swelling from the treatments, Genny was not yet a candidate for a hair transplant. With the lingering reminder of her diagnosis following her every day, she craved a solution. “I told Martino that I was sick of wigs and wearing a hat everywhere I went,” says Genny. “I asked him if there was any way he could give me extensions or something more permanent.” Martino was honest—he can’t put extensions where there isn’t hair—so he sought advice from Dr. Bauman. As luck would have it, he was sourcing new hair replacement systems for patients not able to receive transplants. What he found is nothing short of magic.

Cesare Ragazzi Laboratories in Italy creates state-of-the-art hair devices that will change everything. Using a 3D printer, Cesare Ragazzi medical hair piece recreates the exact shape of an individual’s scalp. A super lightweight latex mold is created and each strand of non-processed, Eastern European hair is individually threaded through the mold to match the patient’s skin color. An FDA-approved adhesive holds the hair piece to the scalp so it will remain on until it needs to be refurbished—which is required every four weeks. In the meantime, you can swim, shower and treat it like your natural hair.

Dr. Bauman knew this was the solution for Genny.

Genny flew down to Boca Raton, Florida to meet Dr. Bauman for their first consultation. In his office, the Cesare Ragazzi team took measurements of her scalp and a month later, he called Genny to notify her that it was ready. The first person she told was Martino. “I texted him that we got our plane tickets, but he told me that he was going to be away that day and that he couldn’t come. I was pretty bummed because we had talked about this before if it ever was going to happen and I wanted him to be there,” explains Genny. “The day before I texted him again and he responded saying he couldn’t wait to see it and that we’d meet at his salon. Up until that point, I was holding out hope but once I knew he couldn’t come, I was pretty upset.”

But can you ever really doubt Martino?

The next day, Genny sat in the room with Dr. Bauman as the CEO of Cesare Ragazzi, Stefano Ospitali entered. He personally wanted to deliver the $15,000 hair piece to Genny. As she sat, essentially surrounded by strangers, a familiar face emerged. “I knock on the door and hear Dr. Bauman say ‘Come in.’ She just lost it. The tears began to flow and it couldn’t have been any better,” laughs Martino. The day quickly became one filled with laughter and tears of joy. “When they put it on, I cried. I had hair again and it looked and felt exactly like my actual hair. I couldn’t even tell where my hair was and where the piece was. If you saw me, you’d never know,” says Genny.

To demonstrate the hair’s strength, Stefano leaned over to Martino. “He asks me to pull on his hair, so I’m pulling on it thinking this is Italian humor when I realized he was also wearing one! You would think that me, looking at hair every day, would be able to tell the difference but you absolutely cannot,” says Martino. Once Genny had her hair, Martino created beautiful waves for her. The final reveal floored her: “I said ‘For the first time in a long time, I finally feel like myself again.’ I can’t even describe what that feeling is like.”

Someday, Genny might be the perfect candidate for a hair transplant—there is no one more deserving than someone as brave and optimistic as she is. Dr. Bauman continues to monitor her health to make sure she is able to get a transplant. “Once the brain swelling goes down, I want to explore whether she’ll be a candidate for the hair transplant. She has enough hair to redistribute into those thinning and balding spots. However, I don’t know if I can make it as good as the hair piece,” laughs Dr. Bauman. “Her hair is now better than Mother Nature!”

In the meantime, Dr. Bauman and Martino wanted to show Genny how safe and easy the transplant is. Martino did so by receiving one—which, in typical Martino fashion, was streamed live online. “I am the biggest sissy on the planet. I get a splinter, I go to the ER,” explains Martino. “After they numbed my scalp with Lidocaine, I never felt a thing. I fell asleep and they literally worked on me for 6 hours putting 400 single follicles into my hairline and 1,000 follicles behind.” After the procedure, Martino got right back to work—appearing on HSN just four days after the procedure.

Knowing how quick and easy the procedure was, Genny was excited not just for the chance to have hair again, but to finally conclude this chapter in her life. “As a young woman with cancer, appearance means quite a bit to me. He boosted my confidence 100 percent and I finally feel like myself again,” says Genny. “Cancer does not define me.”