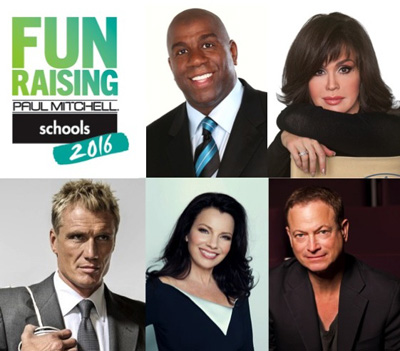 What would you do with $2.5 million? Students at Paul Mitchell Schools have some pretty awesome ideas for how to spend that money—by giving it to nine major charities and dozens of local nonprofits!

Now in its 13th year, Paul Mitchell Schools’ annual FUNraising campaign got underway March 1, with a goal of $2.5 million in 11 weeks. Students and staff members from the 100-plus cosmetology schools will raise money for this year’s supporting organizations:

Last year, Paul Mitchell Schools raised $1.7 million, bringing their 12-year total to more than $15.2 million. Each celebrity spokesperson plays a personal and active role in motivating and encouraging the 13,000 future professions at Paul Mitchell Schools as they raise money thousands of grassroots events, from cut-a-thons and car washes to fashion shows and charity balls. The celebrity partners belong to an elite group of stars who’ve supported Paul Mitchell Schools in the past, including Betty White, Dolly Parton, Larry King, Vidal Sassoon, and Leeza Gibbons.

“People often ask why we promote FUNraising in our schools,” says Paul Mitchell Schools Dean and Cofounder Winn Claybaugh. “Nowadays, it is so easy for businesses to focus only on the money that goes into their own pockets. That is not us. Our FUNraising campaign lets us give back to our communities, join together as a team for something important outside of work, and provide our students with opportunities to develop skills that will help them both in their careers and in life.”

All Paul Mitchell School leaders will conclude the FUNraising campaign with a four-day training featuring guest speakers Magic Johnson and beauty industry icon Sam Brocato. The annual FUNraising Gala, the highlight of the annual campaign, takes place on May 15, 2016, at the Beverly Hilton in Beverly Hills. The event celebrates all of the participating schools while raising additional money. For more information, visit www.paulmitchell.edu or for information on the Paul Mitchell Schools FUNraising, visit www.paulmitchellschoolsfunraising.org.