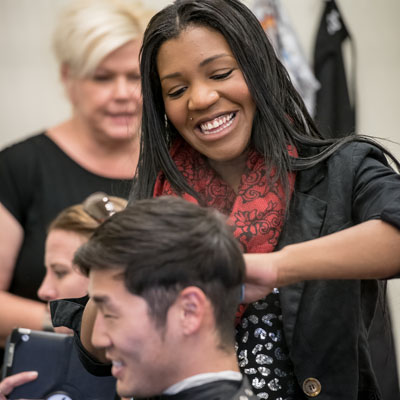 Supercuts stylists from across North America recently showed off their haircutting skills for a chance to be recognized in the Supercuts Gold Comb Awards competition. The competition, which was held earlier this year, was an opportunity for stylists to engage with each other in a new and meaningful way, while letting their creativity and expertise shine through in a finished haircut.

Supercuts partnered exclusively with John Paul Mitchell Systems for the Gold Comb Awards competition prizes. There were 10 grand-prize winners, each of whom won an all-expense paid trip to Paul Mitchell’s ‘The Gathering’ Show, held this year in Las Vegas, NV. The competition also awarded seven second-place winners and five third-place winners who each received Paul Mitchell Prize Packages worth $1,000 and $500! Check out what some of the winners have to say about this friendly competition. The Stylists Share Their Love
Two of the grand-prize winners: Tina from Pennsylvania and Julie from New Jersey, agree that the Gold Comb Awards competition was a chance to blend their own creativity and skills learned through their ongoing Supercuts training. Tina said, “I decided to participate in order to push myself. I also wanted to inspire other stylists by showing them that this is our opportunity to show off our skills.” She found her inspiration in “the posts by stylists from all over the country participating on the Facebook page. We were all technically competing against each other, but that didn’t stop anyone from giving friendly advice or encouragement. And there was an endless amount of support coming from the Supercuts Artistic Director team. It was like having your own cheerleading squad.”

Jason, of a Supercuts in Colorado, was another grand-prize winner. He agrees that the teamwork the stylists demonstrated on the Facebook page “was amazing! Supercuts is really just one big family. We’re all there for each other no matter the distance. And it was wonderful to see how stylists pushed each other during the competition. You never know what will happen until you try!”

The G&C Robins Company is a Supercuts franchise and has 48 Supercuts salons in New Jersey, Maryland and Pennsylvania. Nearly 30 of the company’s stylists participated in the Gold Comb Awards, and seven were winners. G&C also had its own Facebook page for its stylists, where it posted opportunities for stylists who entered the contest to win their own ‘gold comb’ recognition awards from G&C.

“As a company, we provided all of our stylists with encouragement and support,” said Patti Smith, general manager. “We set up a conference call with our franchises to discuss any reservations they had about participating, and encouraged them to not miss this valuable opportunity to be a contestant and show off their skills. Our education team was available to answer questions. We also provided our stylists with videos of haircutting techniques, practice sessions and workshops on how to film and upload their videos. In the end, the stylists embraced it on their own.” The Power of the Supercuts Technique
Thanks to Supercuts’ intensive and ongoing training—and the Supercuts Artistic Directors who train each stylist and keep them up to date on cuts and color—the Supercuts haircutting technique is unparalleled in the industry. And, the brand’s education program for stylists provides all of the technical training, inspiration and support stylists need to grow and succeed.

For the Gold Comb Awards, training and technique was center stage. In the competition videos that contestants submitted, the haircut had to be completed within 20 minutes, the styling completed within 10 minutes, and at least one inch of hair removed. Guests had to be adults. Any color treatment had to conform to the Supercolor training standards. Stylists were required to use only Supercuts-approved cutting and styling tools, and Paul Mitchell products. Platform Artist for a Day
Working up the courage to film themselves for the competition proved to be one of the most challenging—and rewarding—components of this competition. “It was the best and worst part of this competition,” Coppola recalled. “It was so nerve wracking to film. But I overcame my nerves and just continued to do what comes naturally to me. It felt good to watch my video and see the amazing transformation of my model.”

Participating in the Gold Comb Awards also provided contestants with the chance to be “part of something bigger than the four walls you work in,” Brandon said. The awards program, Smith added, “provided exposure on a national scale. It was huge for the stylists’ self-esteem to be recognized by the industry for doing exceptional work.”

Congratulations to all the Supercuts stylists who participated in the Gold Comb Awards. And happy travels to the grand prize winners who are heading to Las Vegas August 15-16 for an all-expense paid trip to Paul Mitchell’s The Gathering at the Arai Resort and Casino!

Get more information on becoming a
Supercuts stylist and the Gold Comb Awards!