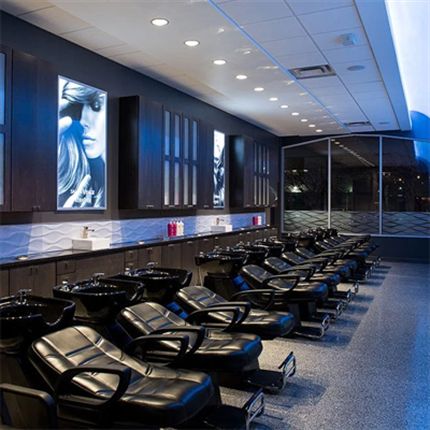 A look inside one of Frank’s salons!

You know Frank Gambuzza—the shoe shine boy from New Jersey who became a top barber, the owner of four salons in Tennessee and the president of Intercoiffure North America/Canada. Yeah, you know him, and if you don’t, you should.

While Frank walks among the industry’s elite, he’s down to earth and charismatic; when he talks business, he’s simple and to the point (why complicate something you don’t have to, right?). So when it comes to running his salons, he’s all about getting down to basics to help his business be the most successful it can be—and we’re about to let you in on his biggest secret. Frank and his staff outside of their salon!

Staff Comes First
First and foremost, Frank is all about his staff—he provides a healthy work environment and generates daily reports to break down how each individual stylist is doing based on their own personal goals. Frank has found that putting an emphasis on his staff helps increase all areas of his business, and coming from a man with more than 40 years in the industry…well, we’re going to trust him on this.

So you’re wondering what those reports look like, right? They’re generated by SalonBiz® and they break down the four key ingredients to a successful salon. We’ll let Frank explain:

“Those are the only four moving parts inside a salon that tell me instantly if the salon is bleeding, if the boat has a hole in it or if you’re sailing with beautiful wind or not,” he says. Of course, SalonBiz® came through by creating and generating the exact customized report Frank asked for and in turn helped him run his business more simply and effectively.

“When a software system can give an owner or manager a stylist’s name and the data that goes along with him or her that shows how they performed along those four regions, the owner/manager instantly knows if they had great day or a terrible day,” says Frank.

Frank says these reports are posted every night by the closing manager, and they are posted throughout multiple locations inside the salon to ensure all stylists see them. “I’ll take someone aside and say, ‘Point to where you are on the list,’ and maybe they didn’t have a great day and they’ll put their head down, and I’ll say, ‘Don’t put your head down—you got today to fix it.’ It’s a great coaching tool when used properly.”

Motivate and Better the Biz
Long story short, Frank’s secret is coaching his staff to improve his business, and it’s all made possible when the numbers and facts are so easily available. “What I’ve learned is that people will put in the work to get better if we can report to them their performance in a positive way,” Frank shares. “If we give a stylist a factual report of what he or she did—good, bad or ugly—more often than not, that stylist will adjust accordingly as opposed to feeling overwhelmed. If I say to them at the end of the quarter, ‘You had a crummy quarter, and you did terrible,’ that’s not going to motivate them!”

Logic tells us that a happy and motivated staff will lead to happy clients, which will lead to more business—and it’s a philosophy Frank swears by. “Once Belinda (Frank’s wife and business partner) and I figured out that our responsibility is to serve our staff, and if we serve them, then they’ll serve the client, our business has only gotten better.”

Are you a salon owner or manager interested in learning
more about SalonBiz® and all its benefits?
See if they’re the software company for your salon!