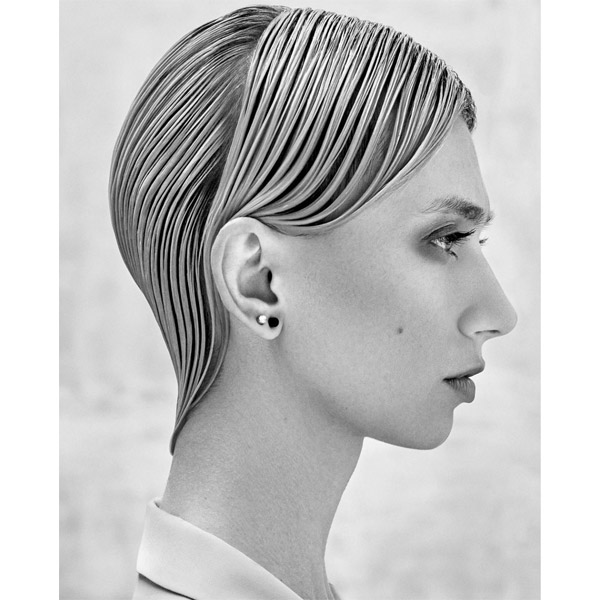 It’s a bright, early afternoon in Bologna, Italy—the glowy hour of the day when the sun is hot, and the perfect escape is a shady spot tucked away under a tree. In a small park between the colossal buildings of bustling trade booths and conversations at Cosmoprof Bologna, we meet Tom Connell, Davines’ Hair Art Director.

It seems fitting to meet the creative leader of a brand whose mission is so deeply woven with the values of sustainability and protecting the environment in this tiny pocket of greenery.

Previously an Artistic Director of Trevor Sorbie, London’s award-winning art team known for their disruptive collections and personalized artistry—we meet Tom at the very start of a new chapter. Born in Manchester, England where his parents owned a hair salon, Tom moved to London at only sixteen to develop his skills and creative identity as a hairstylist.

Throughout his time at Trevor Sorbie, Tom learned a valuable lesson that he carries with him to Davines: When creating work, open yourself up. “It’s about being process-oriented, not result-oriented,” said Tom. “If you’re result-oriented, and you go, ‘I need to do something for a show or a shoot,’ you’ve kind of put a fence around where the idea can go.”

From Tom’s creative process to the ways that he is evolving and bringing newness to Davines’ hair identity—get a glimpse into the creative mind of Tom Connell.

Following the brand’s previous artistic and creative directors Tim Hartley and Angelo Seminara—“two of the greatest hairdressers,” notes Tom—a window of opportunity opened, and with that came a challenge. “The reason I took this role is to create a Davines hair identity. It’s not ‘Tom’s hair identity,’” he said. “I’ve got my own hair identity. That’s the true creative challenge.”

“It’d be so easy for me to come here and do loads of my type of work that I love doing,” said Tom. Instead, his focus is on cultivating a strong brand identity. “If you do your job right, you should probably not be needed anymore in the years to come. You should build [an art] team around you. You should build such a strong aesthetic that can just live on and on.”

“I want to do what has probably only been done a few times in the history of hairdressing.”

“TONI&GUY did it, Sassoon did it and Bumble and bumble. did it in the ’90s as well,” said Tom. What’s that? “Where you can open a magazine and you go ‘that’s a Davines image’ without even looking at the logo.” That’s exactly what Tom plans to create for Davines.

2. Tom & Davines come together: How it all started.

Tom’s relationship with Davines began during his time with Trevor Sorbie, where he was responsible for bringing the brand into the salon. He was mesmerized by the brand’s stories; their commitment to sustainable beauty and the slow food movement to name a few. He was a client first and he connected deeply with Davines, and so did his own clients as he relayed the stories of the brand. And so it began.

It always comes back to a sentence that resonates with Tom, “‘Art is everything you don’t have to do.’ Davines does a lot of things [they don’t] have to do. The products in the bottle could be delivered in a much more simplistic way. But it’s the art and that culture that makes people feel great when they take it off the shelf,” he said.

3. The creative process: How Tom brings newness through inspiration.

Enter the mind of Tom: A filing cabinet of ideas and inspiration found in the everyday. A few minutes into our conversation, he’s distracted for a brief moment—he points out a woman sitting across the way with her brown hair up in a clip, and the way her hair is placed.

“The way I approach it is, you’re never totally turned off. You’ve always got this kind of one eye open,” said Tom. “If somebody makes you look twice, look that [second] time, because there’s something in it. Don’t try [to] question why that thing has caught your attention. It could be a funny thing in a bar that you’ve overheard that you think, ‘maybe I can weave that into a show,’ it might be a texture.”

He glances back at the woman nearby. “It could be that [inspiration] and I’ll make a note of that tonight,” said Tom. “I’ll put it in a file of ideas. About once a month [or two]—again, not being result-oriented when I have to create something—I sit down and I look through the file. It could be piece of music, a color [or] anything that I’ve seen in a documentary. Inevitably, there’s a connection between all of those things. [That is] because you’re inevitably stimulated by the same thing.”

“If you do a job like this for Davines, it’s your responsibility to put yourself in those situations where there’s a chance of that happening,” he added. “You need to open yourself up to new music, new documentaries, new exhibitions, new galleries, so then it kind of comes out like a good idea. It will keep interrupting you.”

4. The secret to bringing newness is looking outside of the industry.

“I always use these cards by a music producer called Brian Eno [who] invented ambient music. He has these cards called Oblique Strategies,” said Tom. “I have them on the desk in the studio and my team has to take a card, and whatever the card says, [they] have to try to incorporate that into [their] work somewhere.”

“If you look outside of your industry for inspiration that leads to innovation, not replication. If you look too much inside, otherwise, you’ll recreate the same thing over and over again.“

One of the cards strikes Tom in his preparation for the Davines World Wide Hair Tour. It reads, “Gardening not architecture” across the card. “It’s more about dropping seeds all the time. You just have little ideas that you just kind of let ferment and grow,” said Tom. “Then you go, okay, this has grown into something interesting [and you progress it.]”

For this recent collection, the concept was to document hair color throughout different times of the day and study the way light filters the color. From enjoying a cup of coffee in the morning, to going for lunch with a friend mid-day, to sitting in your garden in the evening—the color looks completely different, captured in this series of images.

Watch Tom work behind the scenes on the Sunlight Hours collection.

The project’s name speaks for itself, Tom explained: “It’s about growing people.” Davines’ competition and mentorship program is in full swing. This year’s entrants used the ‘Sunlight Hours’ collection as inspiration to produce their own look.

From there, 100 stylists are chosen (from a panel of many different judges) and given another, more specific brief. When the competition trickles down to 35 finalists, they are assigned a mentor. Then, there will be a final round to decide the winner. The previous Talent Greenhouse winner’s prize was the opportunity to present onstage at the World Wide Hair Tour 2022.

After only a short amount of time spent with Tom, the feeling is palpable: His creative brilliance and approach to cultivating Davines’ hair identity will continue to grow into something we’ve never seen before.