3 Tips For Becoming an Independent Educator There’s a growing trend in professional education—one born from social media, nurtured by legions of social media followers and honed by savvy social media stars. Specifically, a new group of independent educators are hitting the road, popping up at host salons around the world and teaching their unique techniques for intimate groups with or without support or backing from sponsors. It has all happened organically, just like the social media growth of the artists who are conducting the classes: bridal and upstyling expert Stephanie Brinkerhoff (@hairandmakeupbysteph); elegant wave and upstyle master Mustafa Avci (@hairsalonm); braid maven Jenny Strebe (@theconfessionsofahairstylist) and unconventional color pro Rebecca Taylor (@vividartistichairdesign).

Like any new business model, it’s often a learn-as-you-go situation, and these artists have done just that. If becoming an educator of this type is on your career bucket list—if you’re keen to cross over from working behind the chair to teaching behind the chair—here’s some hard-earned wisdom from those who have paved the way. 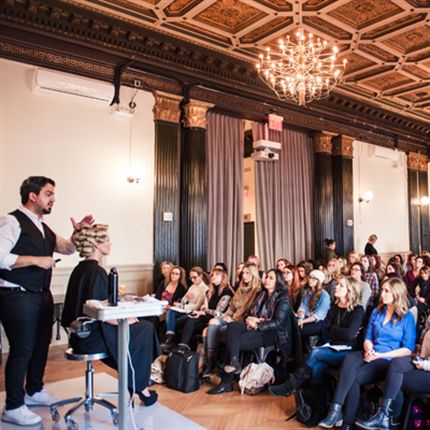 1. It Starts On Social
Without exception, demand begins online. Mustafa’s intricate shapes, Steph’s loosely elegant updos, Rebecca’s vivid hues and Jenny’s graceful plaits have all amassed hundreds of thousands of followers on Facebook, YouTube, Pinterest and most importantly, Instagram. And with those fans came the requests to “teach me all your tricks.” When followers started asking Mustafa how he brings his updos to life, Mustafa’s Workshop was born. For Jenny, who, by the way, is the current BTC #ONESHOT Awards Hot Shot Braid Shot of the Year Winner, education was already in her DNA before her social media recognition took hold—she was an educator for TONI&GUY for six years.

Even though these artists didn’t have a plan when they started, the lesson that emerges is clear: start by thoughtfully and deliberately crafting a distinctive brand and claim your space on social media. “It’s hard to just start out and say you’re going to be an educator,” says Steph, who has taught classes at several BTC events, including COLOR, Cut & Style and “On Tour.” “You first have to build your portfolio and get your name out there. Once you do, people will want to work with you.” 2. Find Your Hosts
Most classes pop up at salons across the country, so it’s important to locate the right host. Again, social media helps. Steph might simply post a notice on Instagram inquiring about a salon space in the city she plans to visit. But more often than not, salons beat them to it by reaching out to the educators who pique their interest. “Exclusive Beauty Salon in Stockton, CA was the first salon to contact me about teaching,” remembers Mustafa. “I didn’t know what to do but I said, ‘OK, let’s do it for $150 a ticket,’ and I sold 35 tickets! From there I got super positive feedback, which then drives more people to buy tickets and more salons to extend an invite.”

Once an invitation comes in, Jenny presents a series of questions. “I ask if they can hold at least 25 students,” she says. “I want to know if they can commit to five to 10 stylists taking part in the class so I have a minimum, guaranteed attendance. I also ask them to provide food and drinks.”

Rebecca takes a cluster approach to setting up her classes. “I try to do four or five cities on the West Coast and then the East Coast,” she explains. “I also require a station to work from, and I like to see where they are located to make sure it’s central for people driving or even flying in.”

The payoff for the host salon is immense. A shout-out on one of the educator’s feeds brings lots of traffic, plus a real bump in cachet; Mustafa and Jenny often Periscope from their classes, which generates excitement and a peek into the salon. “It’s about showing that they’re doing fun things in their salon,” says Jenny. “They’ll get publicity, bring in new clients, attract new stylists, and motivate and retain existing employees because the salon is bringing in these big educators.” 3. Lesson Plans
Most of the educators offer one-day workshops, ranging from six to eight hours. Class sizes run from about 15 to 30 stylists. Naturally, the artists focus on the types of things they are known for. “I teach my signature styles and techniques,” says Mustafa, “because that’s what people want to see. I focus on sharing things that will add value to their work and allow them to raise their prices.”

Steph likes to customize her sessions as much as possible, so she’ll often poll the audience a week or so before the class. “I’ll send everyone an email and ask them to send me a list of things they want to learn or styles they want to see. I also send a list of products and tools that I like, along with suggestions for their own hair kits and models.”

Jenny makes an allowance for the various types of learning styles—visual vs. experiential. Her classes are six hours total, but broken down into morning demos and afternoon hands-on segments. “I offer two different ticket prices,” she explains. “I feel it’s important to do this because some stylists can pick something up just by seeing it, while others have to actually create the look. I limit the hands-on portion to 15 to 18 people so everyone gets enough attention.”

At the end of the day, it boils down to exactly the same things that are important in the salon—quality, customer satisfaction and delivering on expectations. “I think the educational independent movement is awesome but you have to be careful,” says Jenny. “You have to be able to educate and you have to be able to deliver your message or people won’t invest in your classes. In some cases, that’s the one key thing that’s missing. Just because you have a social media following doesn’t necessarily mean you can educate.”